Fish kulambu or Meen kulambu is a traditional South Indian fish curry cooked in tamarind gravy.Fish kulambu is usually made in a clay or earthen pot to enhance the flavour.I have posted here a pure Virudhunagar  Fish Kulambu recipe from my native place using sheela fish also known as Barracuda fish in english .A very simple Fish Kulambu recipe but tastes so good with hot steamed rice with a tsp of sesame oil.

Soak the tamarind in 1 1 /2 cups of water for half an hour and extract the juice.Heat the earthen pot,add tamarind juice and gingelly oil in medium flame . 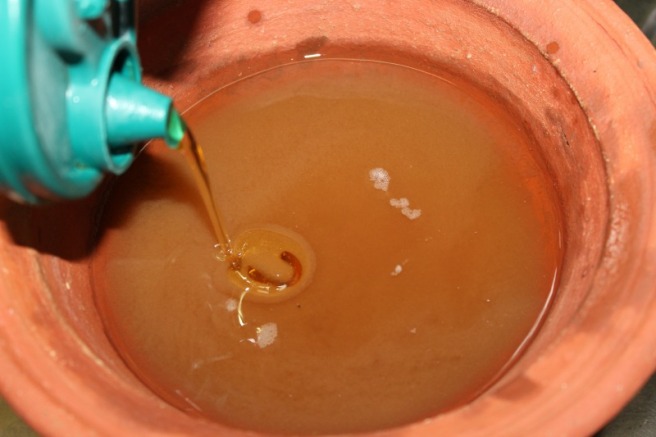 Add the grinded mixture of small onions and cumin powder,then add turmeric powder,salt and let it boil in medium flame.

Let it boil until the raw smell of tamarind and onions goes off.When the gravy becomes thick add the fish pieces one by one and simmer the flame for 6-8 mins.

See that they are cooked on both sides and switch off the flame when oil separates.

Fish kulambu/Meen Kulambu is ready to serve.Serve them hot with steamed rice.

Making fish kulambu in earthen pot will definitely enhance the flavour and aroma.

Use only gingelly oil/sesame oil for  fish kulambu.

You can use any other fish of your choice also.

Add the fish pieces to the tamarind gravy when they become really thick because after adding the fish it leaves out little water.