Attukal kulambu or Paya is a famous non-veg dish in the southern parts of India made from Lamb’s feet.A spicy kulambu mostly served for breakfast or dinner as they dont go well with steamed rice.The rich ,spicy ingredients gives the taste,flavour to the kulambu thus making it more delicious.
I have not used any oil to make this kulambu because the attukal will leave lot of oil(fat) which is more than enough to make this kulambu.Attukal is mostly served in restaurants with Appam,Idiyappam and soft Idly.
Cleaning is really tough,they smoke them and roast them over fire to burn off the tiny hairs and it has to be removed perfectly clean.Better get it done by the butcher.
This kulambu takes a very long time to get cooked.Usually I make them a day before and serve it for breakfast the next day.Make this Attukal kulambu at home and serve with your favourite breakfast. 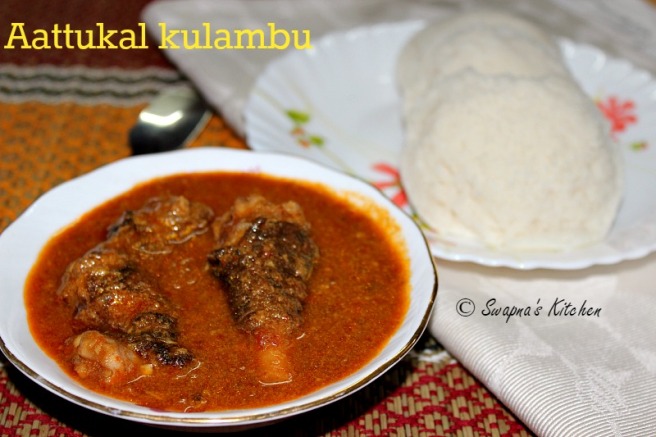 Wash and clean the goat’s leg 3-5 times in water.
Dry grind the ingredients under to grind column 1 without water.

Then add the to grind 2 ingredients with 1/4 cup water to a fine paste.

In a pressure cooker add onions,tomatoes,goat leg and saute for 5 mins on medium flame.

Add 1 & 1/2 cups of water,ground masala 1,2 and pressure cook for 5 whistles on high flame and then simmer the flame to low and cook for 15 mins.

Serve the delicious Attukal kulambu hot with your favourite breakfast.

I have not added any oil to this kulambu as the attukal is rich in fats.

Extract the coconut milk from a full coconut with 2 cups of water.

Dried red chillies gives such rich colour to the kulambu,you can replace them with red chilli powder also.